We are very proud to announce that the incredible painting, "Breaking Glass Ceilings", by our member artist, Jim McKeon, has been added to the permanent collection of the Metropolitan Opera in New York City. Many of Jim's works have themes of diversity, racial equality, and positive energy. Jim's painting, "Breaking Glass Ceilings", is a dynamic portrait of the groundbreaking African-American dancer and choreographer, Camille A. Brown, who grew up in North Carolina. Brown earned a Bachelors of Fine Arts degree from the UNC School of the Arts, and she made her directorial debut on Broadway with a revival of “for colored girls who have considered suicide/when the rainbow is enuf.” Brown was the first Black woman to not only direct but choreograph a Broadway show in nearly 70 years.

After Jim received the exciting news that "Breaking Glass Ceilings" had been selected to become part of the Met's permanent collection, it took several days of careful building and planning to transport the painting to it's new home in New York City. Jim designed and built a custom cage to hold the work on the back of his pickup truck, and drove the piece himself to make sure it arrived safely. Please use the link below to read more: 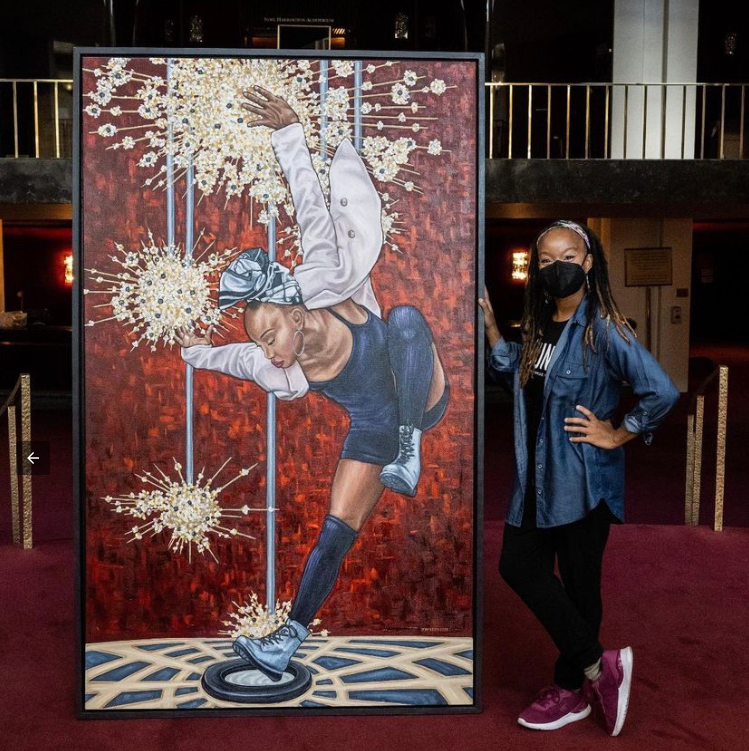 Jim McKeon's painting, "Breaking Glass Ceilings", with the portrait's subject, Camille A. Brown, at the Met

5 Points Gallery is excited to present our featured artist Teddy Devereux. Inspired by a long career as a research scientist, her fused glass creations take on an alchemy of their own. Our current exhibit runs through October 8th, 2022. Please join us for our Third Friday Reception on September 16th from 6 - 9 pm. Meet the artists and view their latest works in a range of mediums including painting, sculpture, fused glass, and mixed media.

Set your refresh button when contemplating the Mandala series by Anne Heartt Gregory. 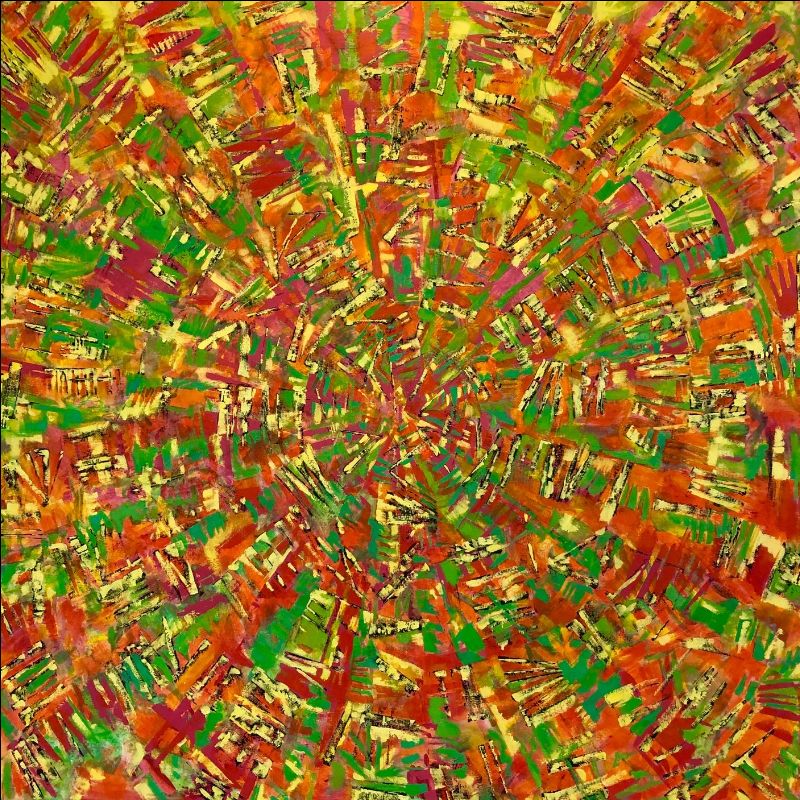 In celebration of our third anniversary, 5 Points Gallery presents "When You’re Hot You’re Hot!" Come beat the heat by visiting our cool gallery to see refreshing new artworks by our nine local artists. Our current exhibit runs through September 3, 2022. Please join us for our Third Friday Reception on August 19th from 6 - 9 pm. Meet the artists and view their latest works in a range of mediums including painting, sculpture, fused glass, and mixed media.

Our nine artists all live in and around the Durham area, and they often use local landmarks for artistic inspiration. This painting by Anne Heartt Gregory, titled "Corner of Church and Parrish", depicts buildings in downtown Durham in a style reminiscent of modernists like Edward Hopper. 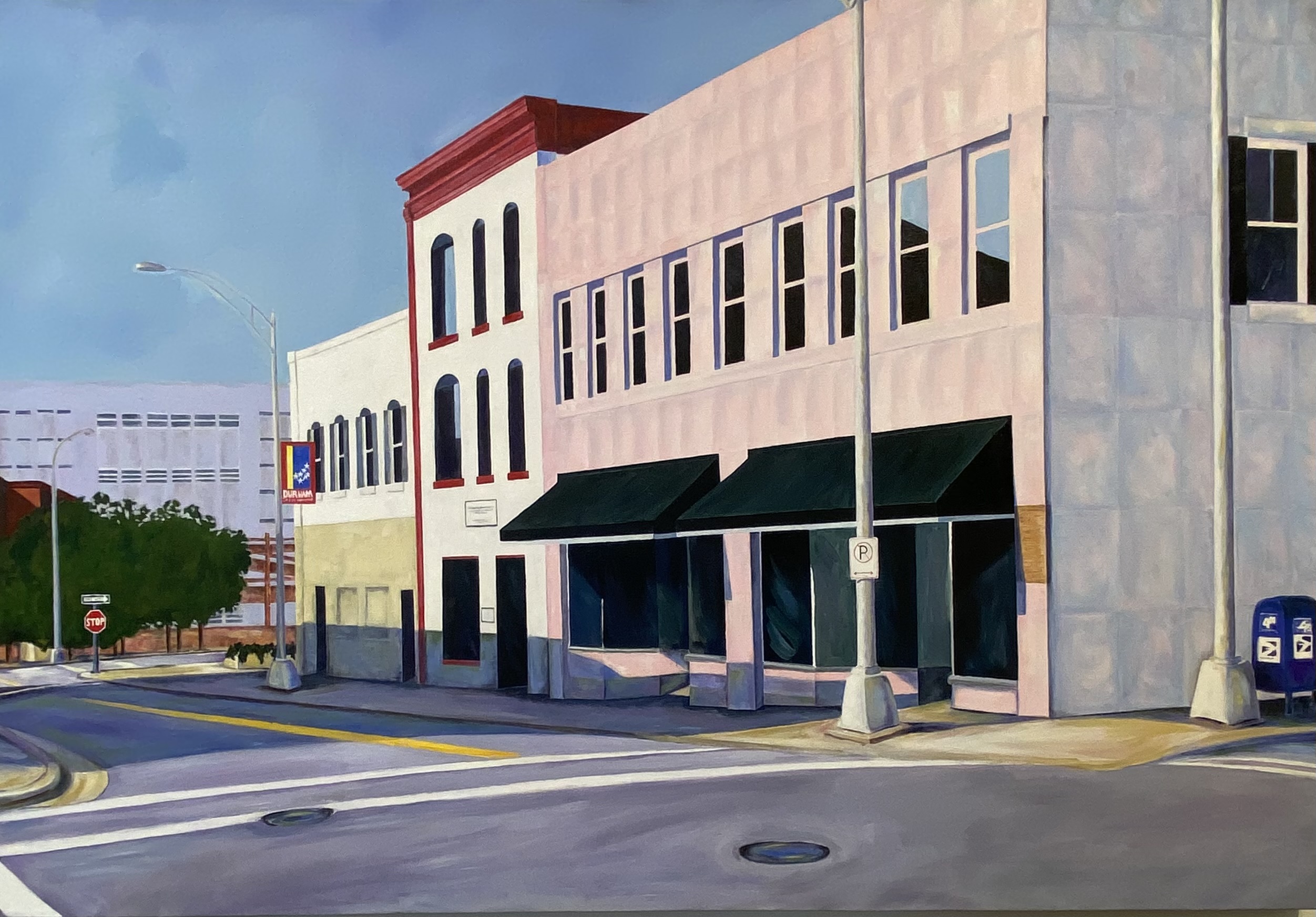 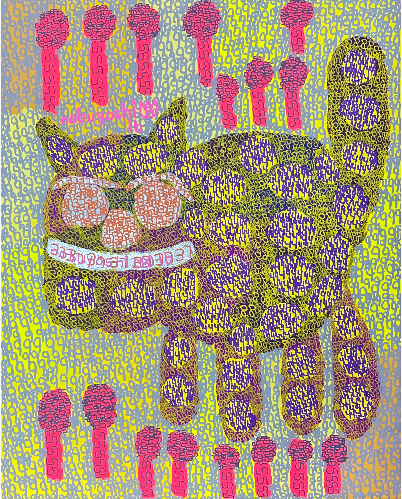 "THE JAGUAR IS HAVING A GREAT DAY BECAUSE IT'S WITH THE TREES (16)"
artwork by King Nobuyoshi Godwin
acrylic on canvas, 20" x 16"

We are excited to announce that our gallery member, King Nobuyoshi Godwin, is featured in Issue #111 of Raw Vision, the leading international journal of outsider art. The journal article, written by King's brother, Malik Nobumasa Godwin, tells the story of King's life and his journey as an artist with both autism and synesthesia:

"King is a synesthete, meaning that he makes associations between numbers, emotions and colours. Vibrant hues and digits appear to leap forth from his paintings and invoke a feeling of joy. He usually paints characters and animals among trees but, rather than describing specific scenes, his work represents the images and feelings in his mind. His larger pieces often have more than a thousand numbers dancing across their surfaces. Each number has an associated colour and, more importantly, each relates to an emotion."

Please read the article linked below to learn more about King and see more of his art!

"JOYFULLY KING: For synesthete King Nobuyoshi Godwin, colours, numbers and emotions are the key to his uplifting art, as his brother explains" 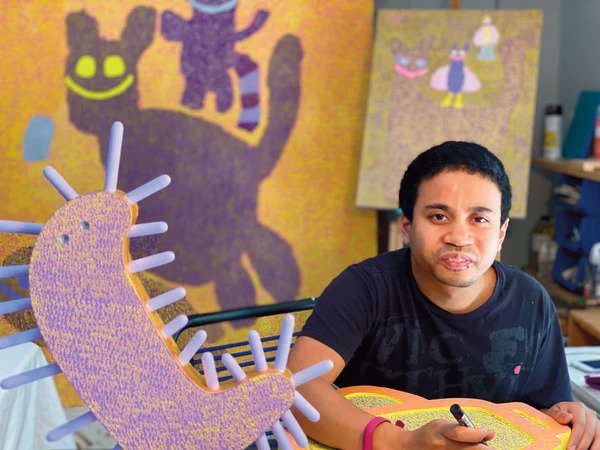 King Godwin in his studio. (Photo by Yuko Nogami Taylor)

The Cardinal & Pine has published an fascinating, in-depth article about our member artist, Darius Quarles. Written by Emily Jaeger, it chronicles some of the struggles that Darius has faced as a talented, up-and-coming Black artist in Durham, North Carolina, including systemic racism, discrimination, and financial hardship. The article also discusses his role as an original member of Pleiades Gallery, which later transitioned into 5 Points Gallery, and it touches on some of the local art projects that Darius is currently involved with. An excerpt:

'Despite the odds against him early on, Quarles believed that if he just worked and kept painting, he would make it. He drew inspiration from Picasso: “He is probably the blueprint for the hustle artist who does everything: murals, playbills….” Anything to get his art into the world and make a living. As Quarles slowly developed a following, he kept experimenting in the studio at a breakneck pace. He painted 12 to 13 hours a day and got to the point where he could make 30 paintings in a month. Even now, he finishes roughly 200 paintings a year. '

Please use the link below to read more about Darius! 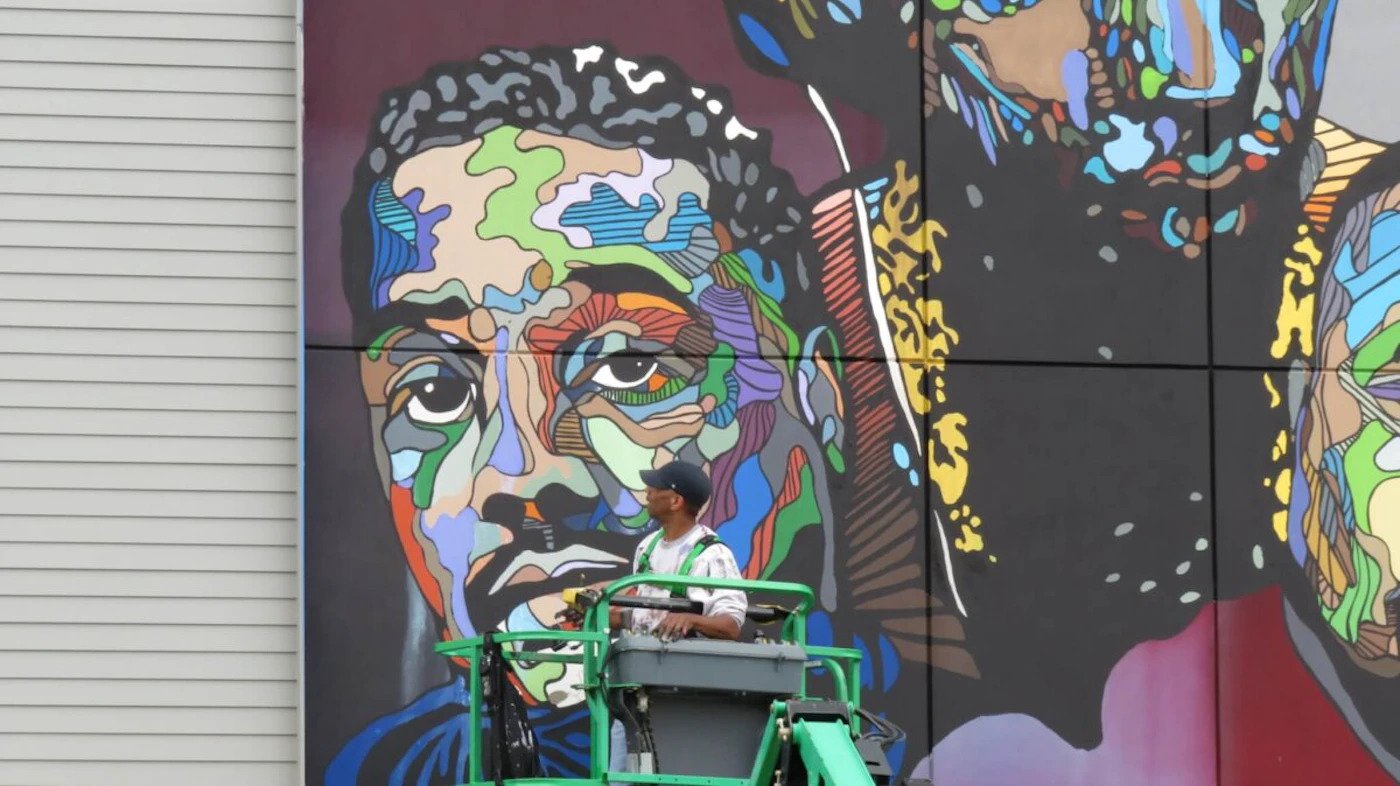 You will not have to search hard to find something interesting at 5 Points Gallery – like this amusing Nihonga technique painting by Yuko Nogami Taylor, titled "Anteater". Our current exhibit runs through August 6th. Please join us for our Third Friday Reception on July 15th, 6 - 9 pm. Meet the artists and view their latest works in a range of mediums including painting, sculpture, fused glass, and mixed media.

A young art lover, with a taste for the abstract, is delighted by a mixed media piece by Donna Stubbs. 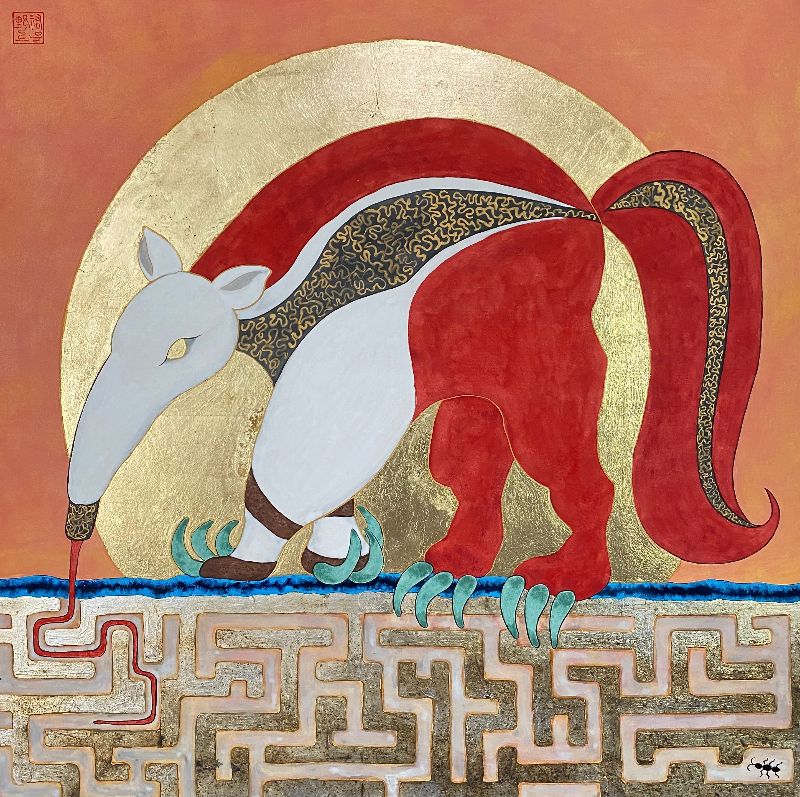 Here comes the sun! Stop by the 5 Points Gallery's historic building where the sun shines through the skylights and illuminates new works by our nine local artists. This exhibit runs through August 6th. Please join us for our Third Friday Reception on June 17th from 6 - 9 pm. Meet the artists and view their latest works in a range of mediums including painting, sculpture, fused glass, and mixed media. 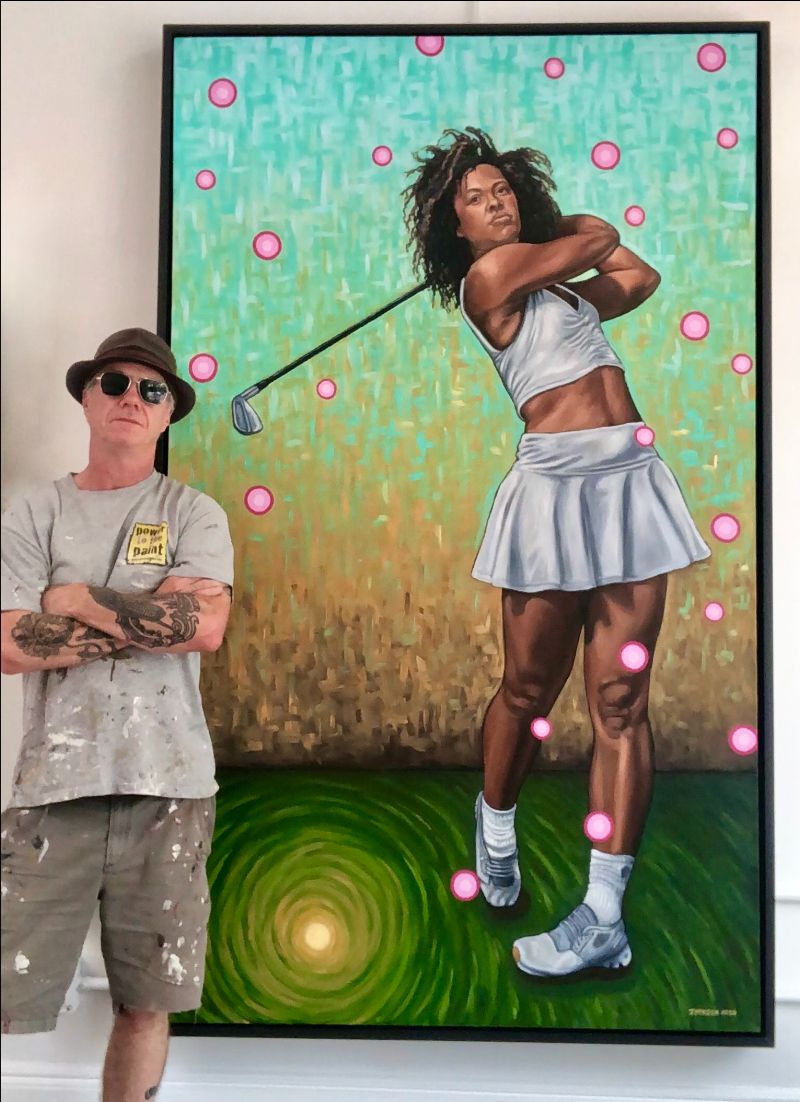 5 Points Gallery is pleased to feature new paintings by Durham artist, Darius Quarles in our downtown Durham gallery. This exhibit is on view from May 12th through June 4th, 2022. Darius describes his style as "unleashed!" Drawn to the controversial, his intriguing compositions often reference contemporary culture. Please join us for our Third Friday Public Reception on May 20th, 6 - 9 pm, where you can meet the artists and view their latest works.

The Bull City really shines in this fused glass mash-up of familiar Durham sites and symbols by Teddy Devereux. 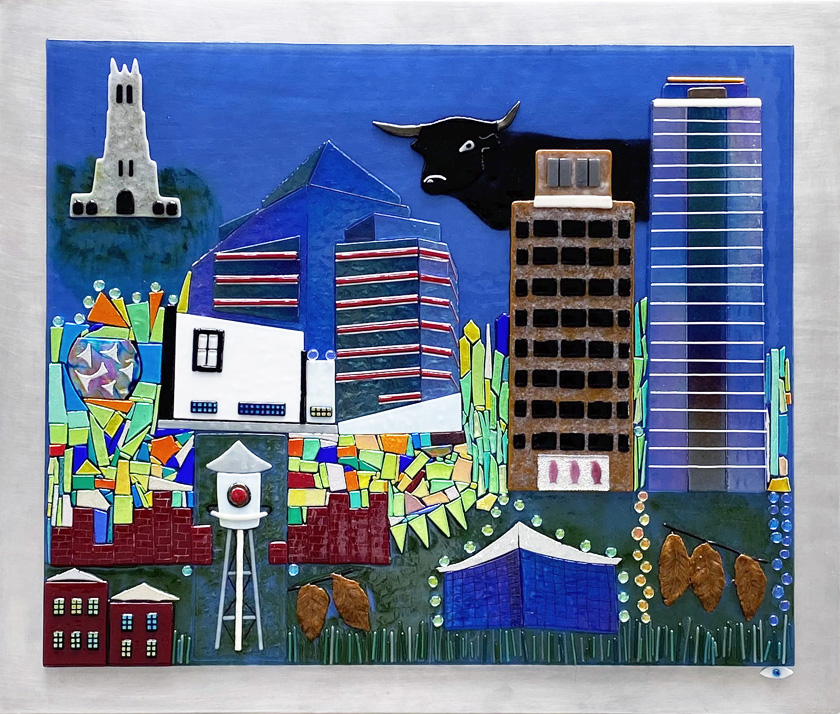 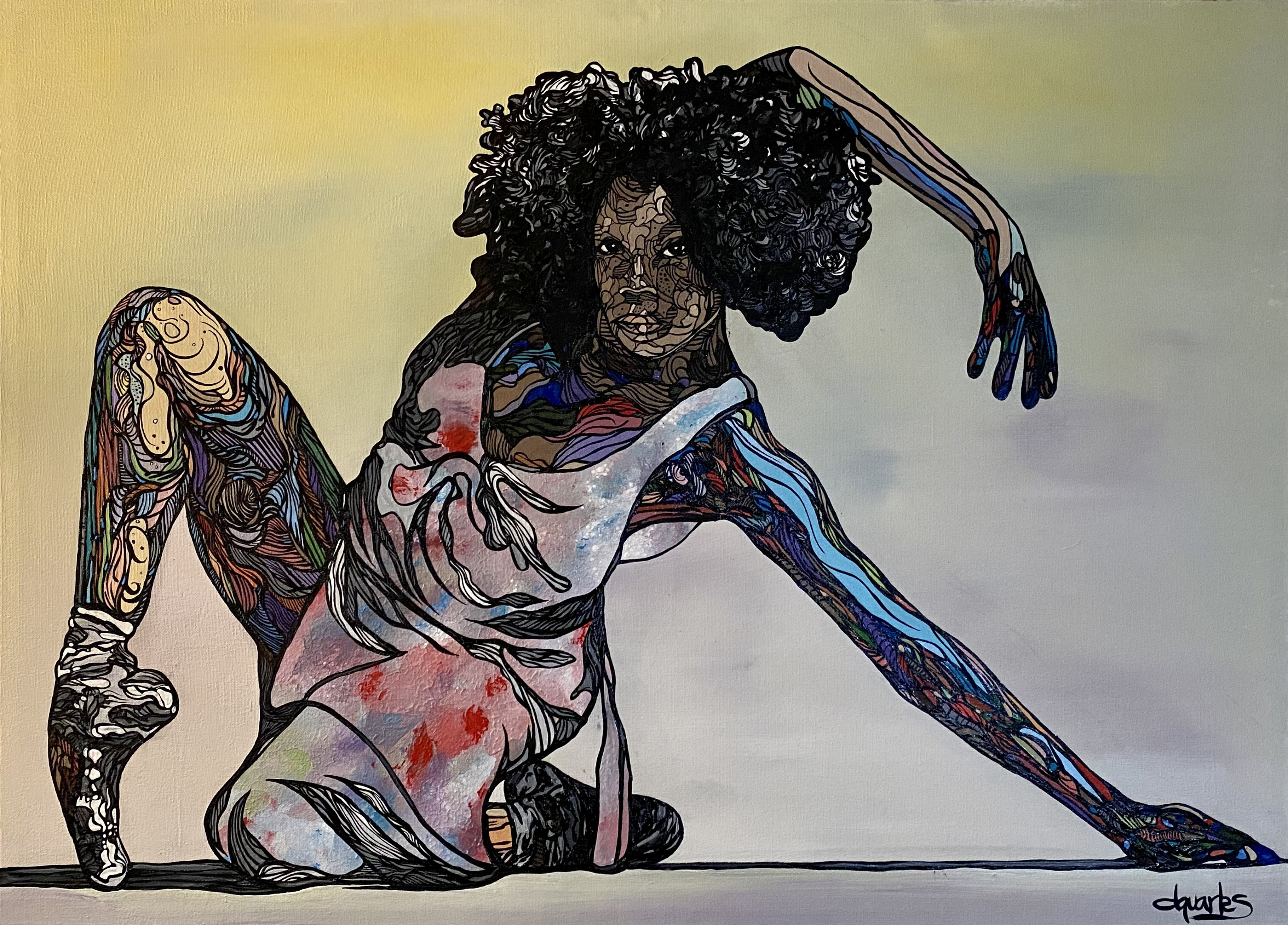 5 Points Gallery is excited to feature new paintings by local artist, Susan Woodson. Her “Birds with Attitude” will tickle your fancy with their strong personalities. She gives each colorful bird a female name as if to say, “How dare you Mother Nature for getting mixed up in creating male birds more colorful than females!” This exhibition runs through May 7th. Please join us for our Third Friday Public Reception on April 15th, 6 - 9 pm, where you can meet Susan and check out the latest works by our nine Triangle-based artists.

Just in time for Spring, Yuko Nogami Taylor muses about the regenerative property of nature in her imaginary array of budding plants. 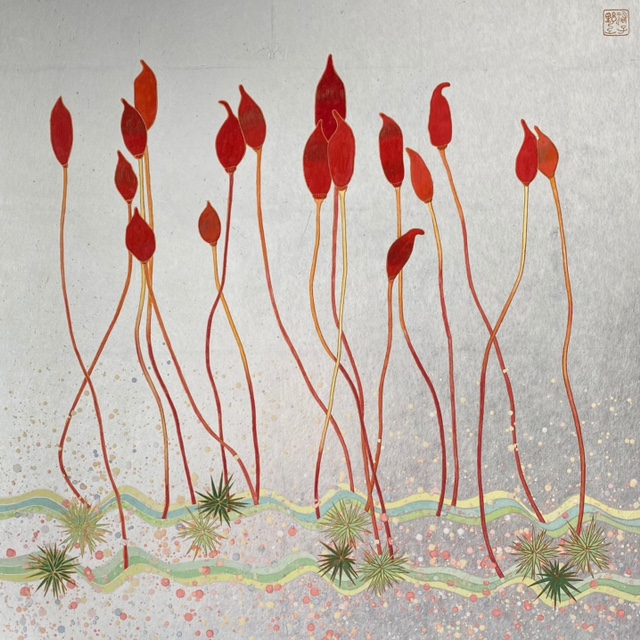 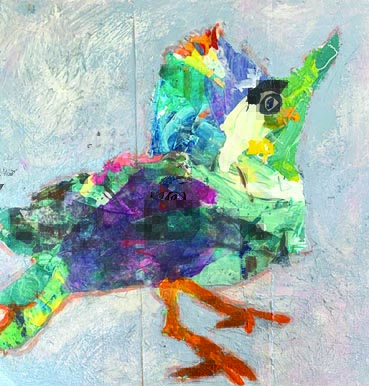 5 Points Gallery is featuring new works by Durham artist, Anne Gregory, through April 2, 2022. On view are paintings from Anne's Mandala Series and Thin Places Series -- both create realms to consider. Please join us for our Third Friday Public Reception on March 18th from 6 - 9 pm, where you can meet Anne and check out the latest works by our nine Triangle-based artists. 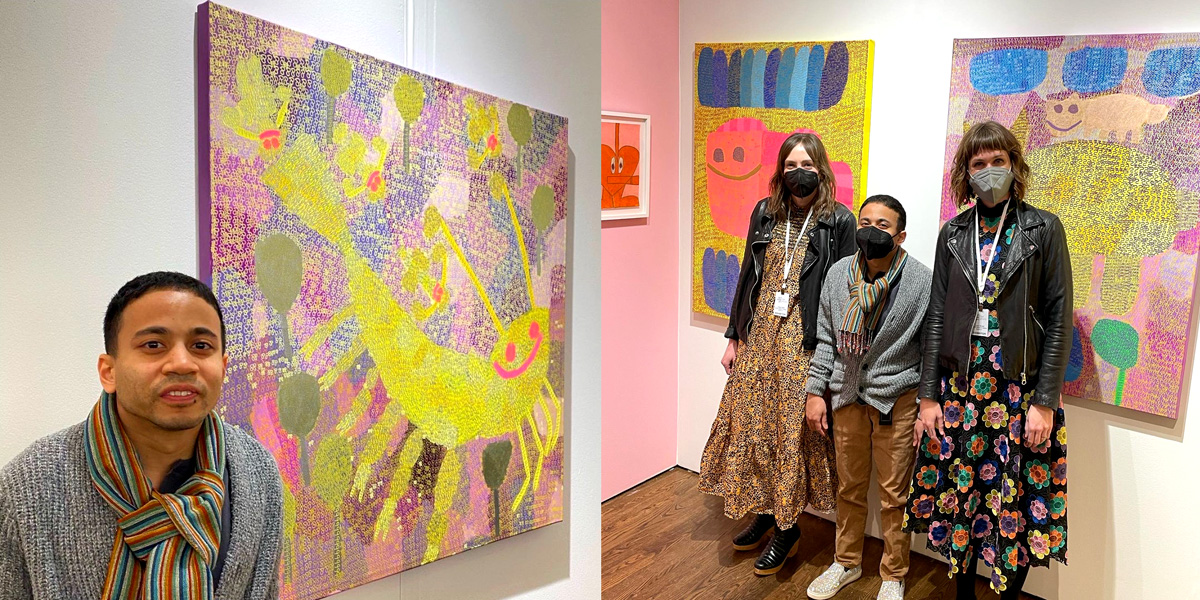 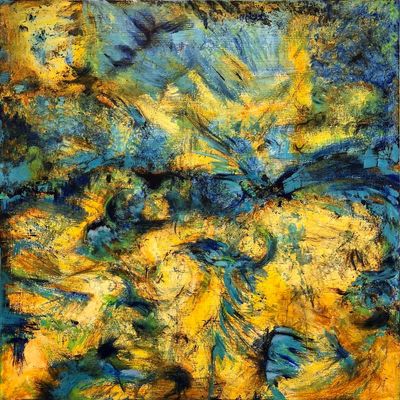